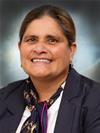 Halimah is the daughter of the late Sardar and Sakina and grew up in a small Yorkshire town called Huddersfield. It was there where she met and married her husband, Laeeq. They later moved to Copenhagen, Denmark, where they lived for several years, before moving back to the UK and settling in Nottingham.

Since 2011, Halimah has been a Councillor for Toton and Chillwell Meadows.

She is an avid fundraiser, having raised many thousands of pounds for various charities since 1999. One charity that is particularly close to her heart is Wellbeing of Women, for which she is the Founder and Chairperson of the Nottingham Branch. Halimah received the National Community Hero Award from Boots in 2009 and was one of just five people to receive the title of the Daily Mail's Inspirational Women of the Year in 2010. In 2016 she was one of three national finalists to be nominated for The Muslim News Awards for Excellence in Community Development.

Halimah was honoured with an MBE by the Queen in 2015 in recognition of her services to charity and community relations.