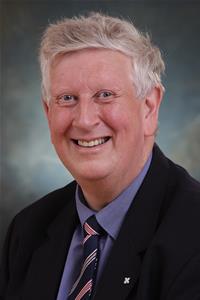 Title: Deputy Leader of the Opposition

Councillor Paul Simpson was born in 1952 and currently represents Nuthall East and Strelley.

Paul was educated at Ellis School and Beeston College before training as a Television Engineer. He soon progressed to Service Manager and was employed by the Coop for over 30 years. He subsequently worked as an Operations Manager until he retired in 2013.

After being elected to Nuthall Parish Council in 2007, Paul was first elected to Broxtowe Borough Council in 2011. During his time as a Councillor he has served on Overview and Scrutiny Committee, Licensing and Appeals and Sustainable Communities. He has also been involved in Budget Working Group since 2013, before being elected onto Cabinet in 2014 and appointed as Chairman of the Housing Performance Committee.

Paul is a member of Nuthall East and Strelley CAT, Treasurer of Beauvale District Scouts and Governor of Horsendale Primary School. He is also Chairman of Nuthall Scout Group, having been involved with Scouting in the local area for the past 25 years.

In his spare time, Paul is an avid gardener and is a member of the National Trust. He also enjoys spending time with his three grandchildren.